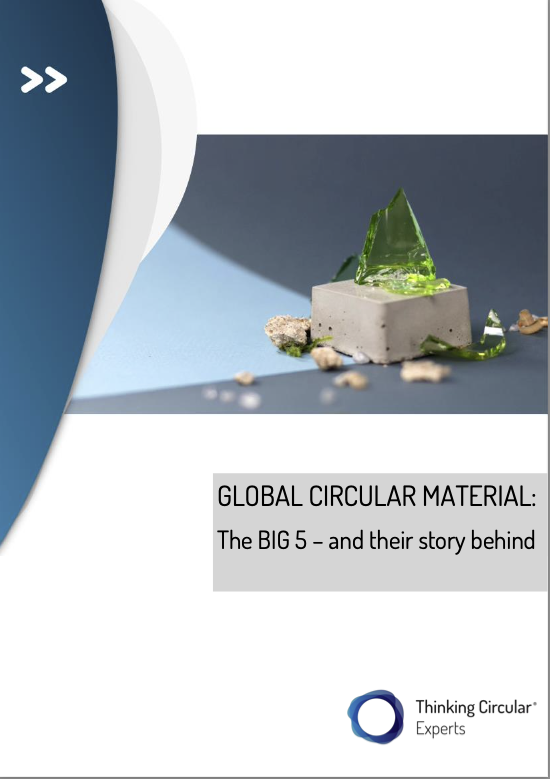 The BIG 5 – and their story behind

The circular economy offers new answers to the question of how 9 billion people can survive on this planet, accepting that there are planetary boundaries and climate change is ongoing. The aim of this study was to identify drivers of the big five globally largest material flows by mass from a circular economic perspective and to understand their story behind.

Many scientific papers about circular economy focus on scoring countries according to their waste infrastructure, which exactly explains lacks in fulfilling the circular RESOLVE principle, incoherent policy making or strategic lacks.

In evaluating the existing, we must draw attention to the story behind the existing reality. What led to the evolvement of the system? Therefore, we have set the focus on what the evolvement of the big 5 material systems tells us about intentions. Unintended things happen, either because we do not pay full attention, the intention was wrong or cause and effect of outcomes were not known. Intention and attention are an interplay that defines the outcome. Climate change started unintendedly. In the Anthropocene, we cope with the sum of unintended effects shown in so-called rebound effects. Therefore, we are looking at the attention with which circularity systems have been implemented and look at paradigms that led intentions.

What can we learn from these materials, that have been managed circular earlier than others? Are we able to derive joint characteristics of their stories that can help us to implement circular systems, in which we can avoid rebound effects in the future? What makes up for differences between the Global North and the Global South?

What we have found is a huge gap in the overall understanding of the circular economy. Indeed, the big five globally largest material flows by mass are successfully recycled in many parts of Global North. Even closed-loop systems could be identified for specific materials. But the most material systems are lacking circular comprehensiveness of circularity. The global context was driven by resource exploitation. The lifecycle of material starts with exploiting resources in Global South and ends with exported waste in Global South again. The story behind the system evolvement shows that growth of industries and mankind’s striving for freedom is accompanied by rebound effects.

By identification of intentions and rebounds we can find parallel structures that are deeply connected to intentions for freedom and must collide with the reality of planetary boundaries. Our hope is to nourish a fruitful debate on the development of elements for circular systems. And learnings from success are as important as learnings from failure.

This study might inspire industrial managers to take the right decision and pave the pathways to a circular society that is just, balances out social and ecological needs and will be a sound ground for survival of mankind on planet earth.