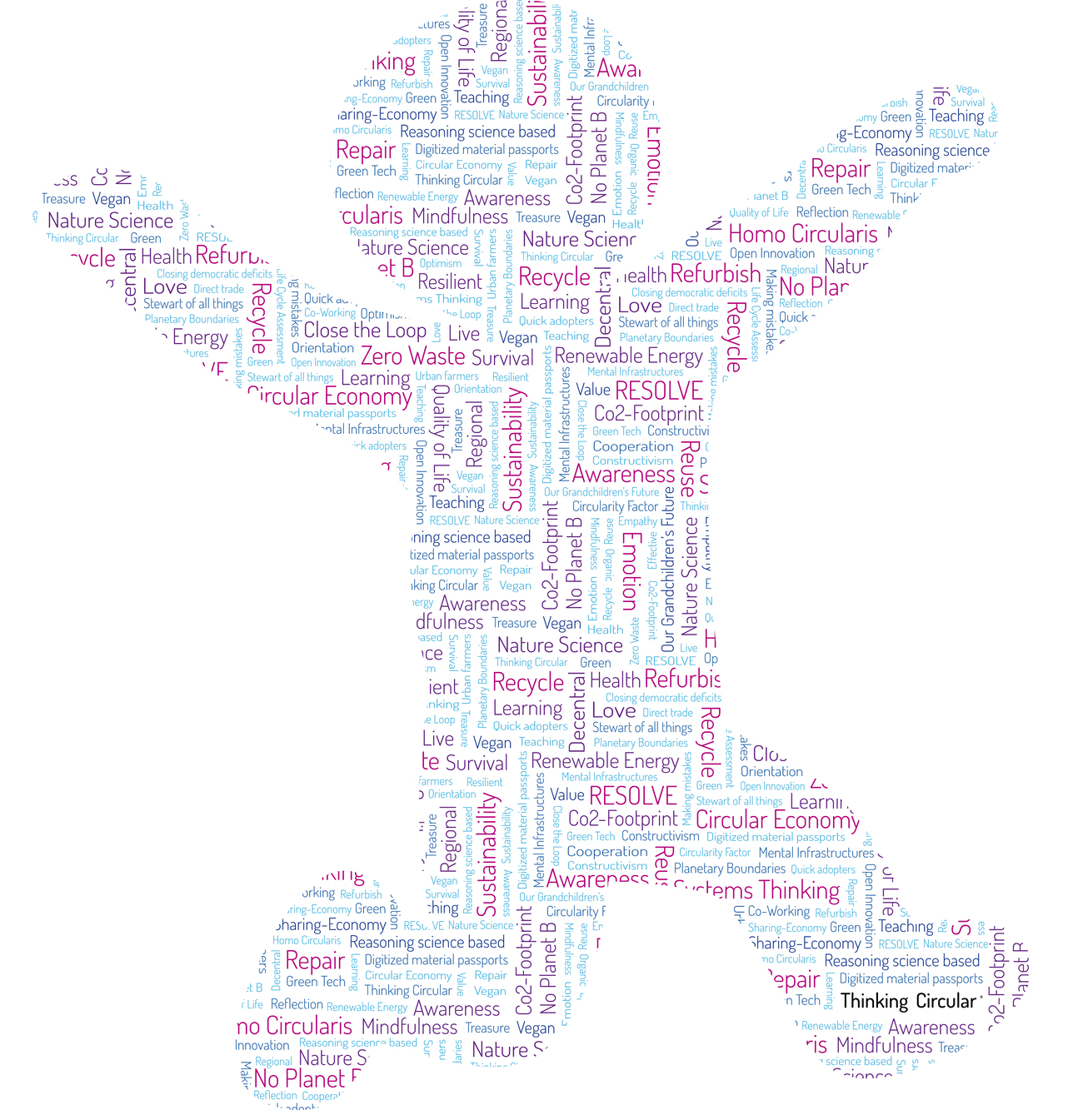 The human actor in the Circular Economy is an interesting topic. Often it is assumed that consumers support the Circular Economy mainly through demanding circular products. System thinkers say, consumers are overestimated in this role. Furthermore, this mindset suggests that we can maintain our current system. The only thing consumers need to do is to consume differently. But that doesn’t go far enough. This we would like to clarify in this blog post.

The Circular Economy sometimes puts the cart before the horse. In recent years, the Circular Economy school of thought has focused mainly on how the economy would have to be transformed to keep us within planetary boundaries. But our economy is made up of people acting out of certain principles. And in order to think planetary boundaries holistically, not only the economic systems, but also the people and their patterns of thinking and behavior have to be considered.

Since 2020, the Circular Economy discourse has increasingly been concerned with a Circular Society and the people who are part of the transformation. On the way to a Circular Society, more and more questions emerge about the role of individuals. On the one hand, we have producers. On the other side, we have consumers. What is the mindset of consumers in a Circular Economy? How do Homo Circularis express themselves individually, in society and in a circular economy? Are we still talking about consumers? Or of prosumers? And will these still be two different sides of economy? Are consumers as powerful as they are sometimes made out to be? What values do they follow? How does circular consumption work?

Today, we refer to people who participate in the design and manufacture of products as prosumers. The concept of the prosumer is thought beyond consumption. The production and sale of solar power with one’s own PV system can be cited as an example here. But you can be a prosumer in many areas. For example, visitors to a wiki who occasionally contribute or bloggers who read and comment on other bloggers’ posts are also considered prosumers. Being a prosumer can start with growing your own vegetables. And continues with upcycling products, when a prosumer makes a whole new product out of an old can.

But is the concept of prosumers sufficient? Wouldn’t it be better to talk about stewards in the future? In other words, people who see their role not only in co-designing and co-manufacturing products, but in accompanying and preserving materials? This would make the prosumer a precursor of the steward. Defining and distinguishing the two terms is important because language significantly influences our patterns of thought and behavior.

We must accept that we have only borrowed the earth from our children. These borrowed materials need a companion, a steward – at every point in the value chain. Even in consumption. And this goes beyond the question of which products and services consumers will buy in the future.

To know consumers better is not only interesting for market researchers. What do consumer types look like that are addressed with marketing? Kersty Hobson talks about the emergence of “paradoxical figures” when describing consumer images or so-called personas. We find her critique interesting and have shed some light on it.

The Compass defines consumption as a shift from owning products to using products with “product-as-a-service” representing business models of the future. The Compass argues that such a “reset of foundational premises” can be politically translated. But does that apply to consumption? Hobson is critical. How could it be translated?

SystemIQ and the Club of Rome suggest to:

– provide consumers with alternative options they can explore by opportunities offered by a less ownership-biased younger generation, and

Hobson doesn’t think that’s enough. As a scientist, she knows research confirms that “educating consumers” doesn’t necessarily result in behavior changes. Research also shows that it’s naïve to assume that the younger generation is less ownership-oriented. It often depends on circumstances and income. When young people get jobs and have families, this changes significantly. Therefore, it cannot be assumed that younger generations have a certain mindset that enables circular consumption.

If we follow the path of SystemIQ and the Club of Rome, it is likely that our current economic system will remain in the status quo and not be transformed. Hobson suggests that the concept for transformation must go beyond the “product-as-a-service” business model and beyond the “use rather than own” mindset. For example, there is no proven reason for assuming that car sharing creates a sense of obligation that a shared car is a community asset. It may result in a mindset of “if everyone is responsible, no one is responsible”.

Hobson further criticizes the lack of an important perspective in the consideration that is fundamental to mitigating rebound effects. She thus criticizes the conceptual basis of the SystemIQ approach, saying that consumers do not change their behavior just because a product is labeled greener. The jungle of labels makes consumption information even more difficult. Consumers drop out. Instead, they will continue to buy products and services that are better.

This indeed is the case: Assumptions describe that however products are made (better, faster, stronger), consumers will accept them because they are BETTER, not because they need them. Electronic devices offer a good example. They can be more efficient to save energy. But the accumulation of electronic devices in consumers’ attics and basements proves the rebound effect. Here, mountains of resources are lying in storage. Another example could be electromobility. If consumers feel better about driving electric cars and thus drive more environmentally friendly, what is stopping them from driving more? What motivates them to drive less in the future, despite a clear conscience?

Making better or more efficient products cannot be the solution to supporting circular consumption in a Circular Economy. It would rather mean that we keep the economy within the current norms and systems and just “keep going”.

Of course, there will be different consumers. For example, there is the “homo economicus” type of consumer who will always buy the product that serves him best, e.g., because it is the cheapest. Greed is still great.

But there will also be the “Homo Circularis” type of consumer, who sees his role differently. He will not only see products and services that make his life more comfortable, but also the opportunity to actively help shape the world and to engage in “consumption work,” as Hobson calls it.

While “homo economicus” picks up the best option because it serves HIM, “homo circularis” is able and willing to take on “consumption work” in forms of new material relationships, e.g., car sharing, as well as to participate in various forms of local volunteerism, e.g., repair cafes. Hopson argues that theories of “consumption work” show how much the economic system relies on such unpaid work. The Ellen MacArthur Foundation, as well as other key Circular Economy players, see “consumption work” as a benefit to us all. But many studies show that there must be limits on how much work we can all contribute. Shopping needs to be fast…

The European Green Deal (2019) combines making better products and “consumption work” as targets for the Circular Economy Action Plan: The Circular Economy Action Plan will “include measures to encourage businesses to offer, and to allow consumers to choose, reusable, durable and repairable products. The Commission will also analyse the need for a ‘right to repair’, and to curb the built-in obsolescence of devices, in particular for electronics. Consumer policy will help to empower consumers to make informed choices and play an active role in the ecological transition. New business models based on renting and sharing goods and services will play a role as long as they are truly sustainable and affordable.”

This is good, of course, but Hobson warns about the “sacred cow” of consumer sovereignty. Consumers cannot control the nature and scale of production solely through their consumption choices. And without a right to repair, no one would tackle the necessary consumption work, Hobson faults. Strong consumers need strong rights. At the same time, Hobson reminds on the fact that greatest impacts of consumption lie in areas such as travel, housing, and food. This again raises the question of how people think and live in a Circular Economy that goes far beyond buying products.

We think Hobson is right: the slogan “more efficient markets and business models” will lead to ever new rebound effects. That’s why we need to stop talking about the “Circular Consumer” and explore the impact of other concepts.

We are fond of the “steward” concept! The steward buys products that are designed to be recycled. He repairs them for as long as possible. Instead of throwing the product away, he returns it to the life cycle at the end of its useful life: to the producer, to the next user, or to the recycler. In this role as a companion, he thus transfers materials to the next life cycle phase. Similar to a steward or a stewardess on a flight, he or she accompanies the material from A to B. In this way, he or she protects and preserves the material cycle. The steward protects and preserves the value of the resource. This also involves a different mindset. The steward is aware of his responsibility and respects the planetary boundaries. He is aware of his task of transferring the material to the next phase of use in a quality as high as possible. This also clarifies the question of responsibility in car sharing. A Homo Circularis, which describes the idea of a steward, could be a good starting point to implement this concept.

By Eveline Lemke and Charléne Nessel

Find our podcast (in German) about circular consumption here.